Portsmouth-based “electronic, shouty rock” (in their words) five-piece Seething Akira are a lively bunch, and in spite of being soaked by the diabolical rain, and shaken by being beaten up during the making of their latest music video for ‘Airstrike’, their live performances are just as energetic.

Rockshot’s Nick Pollard spoke to Seething Akira backstage after their very soggy and muddy show at Butserfest. Needless to say, this was a conversation that was rather difficult to keep under control, and the quest to find their ‘deeper side’ continues.

I was sent a photograph of you guys posing on tiny kid’s bikes. Can you actually ride those?

Charlie Bowes (Vocals/Production): To be fair, I think it was a bit easier for you. You had the best bike to be able to do that on.

Kit Conrad (Vocals): Our wooden ones didn’t have pedals, so we just fell down the hill a bit.

Stu Radcliffe (Drums): I did feel sorry for the kids we robbed though.

Charlie: He deserved it.

Stu: You didn’t need to break his nose though…

Charlie: He said “no” to me, and you know what happens when kids say no to me.

Everyone else: You break their nose…

You were first on today, were you not?

Charlie: Yes, we were.

Dick: We had fun. It’s great fun to play the breakfast shift.

Charlie: We were very pleased that it was the only stage with a roof, therefore everyone just wanted to stay dry. Whether we were poo or not, they would stay and watch us!

Kit: We had no idea whether or not it was a good gig.

Charlie: Well, it was a busy gig, so there is your answer!

Having a look on your Facebook page, I did see that one of you commented that you were worried that there wouldn’t be enough people there for a conga…

Charlie: It’s happened before! At Breakout in Brighton we had a little conga line, which was really nice.

Kit: They started rowing as well.

Charlie: I think everybody was a little too sleepy to conga. We didn’t put them under pressure…

Stu: It’s not mandatory. You don’t have to conga at all Seething Akira shows.

Dick: Unless we’re headlining. Then you have to.

Kit: It’s part of our rider.

An online description of Seething Akira says that your ridiculous video for ‘Airstrike’ is “halfway there” to define you. What is the other half?

Dick: I think that there’s a deep side. Somewhere. But we try to keep it fun.

Charlie: Sometimes we will put a mini message in there. Hey kids! It isn’t all about spandex and wrestling!

Kit: We’ve got feelings, you know.

Where was that video recorded?

Charlie: There’s a mixed martial arts gym in Portsmouth called Gym 01, and we know the guys who run it, so they allowed us to come in and let us use the cage. There were a few fighters who were quite happy to beat us up. In fact, a woman called Laura, was I think No.4 in the UK for MMA, and she was fighting Kit. Slammed him all over the place. She kicked his arse. We enjoyed watching that.

Kit: It’s not fighting. It’s just abuse. She was very good at kicking people in. I can tell you from experience.

On 22nd September you will be supporting Feed the Rhino at Southampton Joiners. How did this concert come to be? 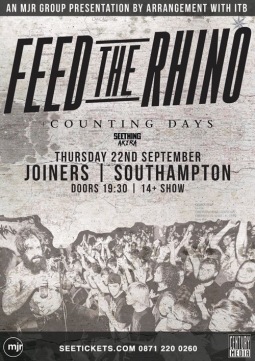 Kit: The promoter who is putting on the show asked us if we wanted to support them, and I’m a huge fan of Feed the Rhino. I absolutely love them. And we have played with Counting Days before, who are also on the bill. Feed the Rhino are quite different to us musically, but they do like to put on a live show, and that’s something we try and do – keeping everyone entertained when we’re up there. I think it’ll go down well.

Thinking back to that bike picture, some musicians get a little fed up when one image is associated with them. For example if there is anything mentioning ‘underground’ in a band or song name, there will be loads of photos of you posing in coffins. Are there any that you want to distance yourself from?

Kit: Since we did a video in spandex, people just want to see us in spandex.

Charlie: We have been asked “can you play your gig in what you wore in that video?” and we’ve had to turn them down. Maybe one day we’ll do it. We’ve still got them. But we try and do something new with every video, as best we can, so the next video will be completely different.

It has been over a year since your most recent music video, so dare I ask…

… when can we expect another?

Kit: Oh, I’ll take this one. We had a bit of a hold up. I won’t go into too much detail but we were going to release an album, but we pushed it back to an EP so we could get it out quicker. It will be coming very soon. There will be some brand new stuff on it, and we don’t want to release shit. We want it on point.

Charlie: And there have been some video ideas already, which might be done soon.

If your band were a food, what would you taste like?

Stu: A good cheese sandwich that you have burnt to a crisp. That you’ve dropped in poo. Then microwaved.

Charlie: And then you eat it while crying.

Dick: While sat in the rain.