The hidden track is getting old, and has been for quite some time. Unlisted tracks paved the way for hidden content in the 1960s, with The Beatles’ ‘Her Majesty’ often receiving credit as the first hidden track. At only twenty-three seconds long, it is easy to go unnoticed on vinyl, a format that won’t allow a long silence at the end of the track.

That infuriating silence found at the end of many an album is made redundant by anybody ripping a CD onto their iTunes and noticing that the final track is thirty-minutes long, which is simple to skip through with a single click. Hidden tracks are less ‘hidden’ and more ‘annoyingly inaccessible’.

This is less a list of favourite hidden tracks, and more a list of albums that I have in my own collection that have been a little more creative in hiding content, that during the life and times of MP3s, can screw with the system.

OK, this song does appear after an old-fashioned half-hour silence. However, this has a special distinction. The track hidden at the end, unlisted, is the album’s debut single ‘Running the World’. While it appeared listed on the Children of Men soundtrack, needless to say, it is an unusual choice of what to hide. There are no hidden messages, as it is pretty blunt with what it has to say. Expect no less from a song featuring 15 uses of the word ‘cunt’.

Honorable mention goes to Janet Jackson, which did the opposite. For one, she chooses not to use the c-word. Rather than taking the previously released song and then hiding it, she gave hidden track ‘Whoops Now’ more exposure, by releasing it as a single. As a result, a hidden track got into the top 10.

Subsequently, hiding it was now a little redundant.

9. HIDING TRACKS IN THE MIDDLE OF AN ALBUM

Coldplay’s Viva la Vida or Death and All His Friends hides ‘Chinese Sleep Chant’ and ‘The Escapist’.

Here is an example of tracks that one can easily hear, but can’t see.

The album (by which it should be called now, rather than its tedious double title) features a track entitled ‘Lovers in Japan/Reign of Love’. The choice to merge the two songs into a single track was to deliberately create a shorter tracklist, as Coldplay tried and failed to make the short album that they had attempted. As there were two songs listed there, and not on any other track, surely it wouldn’t happen on any other track.

Track 7 of 10 is over seven minutes long, yet the song, ‘Yes’ ends at 4:05. The additional three minutes allows space for the unlisted instrumental ‘Chinese Sleep Chant’. Similarly, the final track contains both the listed ‘Death and All His Friends’, and true closer ‘The Escapist’. By this point, it really is about time that those feeling short changed with only 10 songs should stop complaining.

Queens of the Stone Age’s Songs For the Deaf hides ‘Hidden Track’.

Coldplay’s album (told you I couldn’t be bothered with the title) is a textbook example of an album that plays you the supposedly hidden track whether you like it or not. Queens of the Stone Age decided to release a hidden track and list it as plain as day. How does that work? 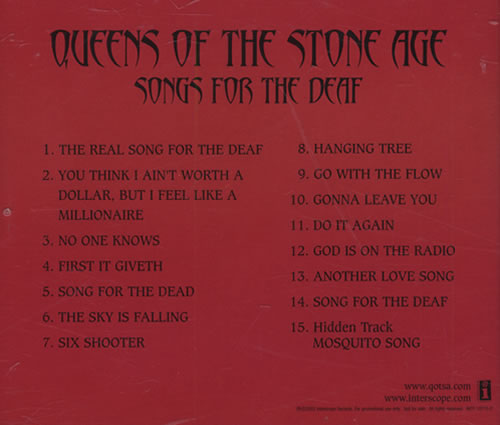 On the album tracklist, below the title track (and supposed album closer) is one more track: ‘Mosquito Song’. How do we know it’s a hidden track? It says so above it! However, there is more to this than meets the eye.

The album’s concept is that of somebody flicking through radio stations on a long journey. At the end of ‘A Song For The Deaf’, guitarist Dave Catching says to the listener “Dave Catching here, not saying goodnight… just saying.”

He’s not lying. That supposed subtitle to ‘Mosquito Song’ isn’t a subtitle. ‘Hidden Track’ really is its own entity after all, before we even get to ‘Mosquito Song’. It’s only a short snippet of earlier single ‘Feel Good Hit of the Summer’, replacing the vocals with rhythmic laughter, but it’s a curiosity nonetheless.

Here is an album that will forever be known as ‘the one where Manson has boobs’. There is another interesting compliment to the album beyond its infamous artwork.

Mechanical Animals came at a time when it wouldn’t have been commonplace to rip albums onto a computer. However, if you wanted to play the album on your PC, you would be greeted with a black screen featuring additional artwork and an eighty-two second long track, allegedly part of decoding the album’s concept (though nobody ever has). Unless you are still running Windows 98, odds are that YouTube will be the place to go to hear Manson’s groaning.

The lyrics can be found hidden in the album’s booklet. In one printing, the CD’s case in blue, and when placed over certain sections of the album’s sleeve, messages would appear, notably including the lyrics to the mysterious track 15. Curiously, the vinyl version was printed on similarly coloured transparent vinyl for the same purpose.

6. HIDING TRACKS IN THE PREGAP

This technique is nothing new, and lots of albums have chosen to hide content in the data ‘pregap’ of CDs. If listeners rewind past the beginning of track one, ‘track zeroes’ can be found. Nosing through my own CD collection This can be found in the aforementioned Queens of the Stone Age’s Songs For the Deaf (exposing ‘The Real Song For the Deaf’), Bloc Party’s Silent Alarm (exposing ‘Every Time is the Last Time’) and Blur’s Think Tank (exposing ‘Me, White Noise’) amongst MANY others. Humorously, Pulp hid a two-second long cymbal crash at the beginning of This is Hardcore, presumably a satire of the hidden track.

Notably, there are such gaps attached to every track, therefore making it possible to include hidden introductions and codas in the middle of the album, something exploited by Nine Inch Nails’ The Fragile.

5. HIDING IMAGES IN A SPECTROGRAM

First, what is a spectrogram? A spectrogram is a visual representation of sound. The Y axis is the level of the frequencies, and the intensity of colour is the volume of those frequencies.

It’s quite pretty. What isn’t so pretty is what some musicians have decided to hide in them. Aphex Twin famously hid his face in B-Side ‘Equation’. See it at 5:30.

Slightly cuter is Venetian Snares’ ‘Look’ which is composed entirely of pictures of his cats. Fittingly, the album is called songs about my cats.

Monty Python’s Matching Tie and Handkerchief hides an entire side of vinyl. Sort of.

The aforementioned ‘Her Majesty’ by Beatles managed to be classed as a hidden track by not listing the song and being so short that it is physically unnoticeable on vinyl. Monty Python’s approach was far more creative.

To explain what this means, take a look at this swiss roll.

A record’s groove is a spiral, like that cream. The needle goes into the groove and gets closer to the centre of the vinyl as the album progresses. Now imagine that the cake itself also represented a groove. If these interlocking spirals shrunk down to the size of grooves on a record, the vinyl could play entirely different tracks that they would were the needle dropped in a slightly different place.

It was a sad loss when it found its way to cassette and CD and this technique was made redundant. As many eyes ignore vinyl, perhaps this is a fine time to do it again.

3. HIDDEN GROOVES ON THE RECORD LABEL

Considering Jack White’s Third Man Records going the extra few miles with vinyl oddities, it’s a surprise that he appears just once here. Records can be printed on all sorts of materials, from plastic, to chocolate, to ice. One of the more standard departures was the  Flexidisc.

The Dead Weather exploited this by hiding material in plain sight, by including unlisted grooves on the vinyl’s label. Irritatingly, some record players, including mine, can’t play them as they are too close to the centre of the record. White is not stranger to unplayable records, especially having released a compilation to be played at 3RPM. Yes THREE. Not 33. No fair.

Do you remember those irritating screeching sounds of the data sluggishly traveling down the phone line when modems were dial-up? Closing track ‘300 BPS N,8,1 (Terminal Mode or Ascii Download)’ consisted of such noises. This perhaps isn’t the most pleasant of tracks to kick back and listen to, unless you fancy a nostalgia trip back to the 1990s.

So why did they do it? This was to feed into a computer and be decoded as data, revealing a text file, readable on the YouTube video above.

1. INCLUDE AN ENTIRE UNLISTED ALBUM

TISM once wrote a song entitled ‘Defecate on My Face’ discussing the suicide of Hitler, and blaming it on Eva Braun’s refusal to do the titular deed. Another famously made fun out of the deaths of celebrity’s, inducing threat’s from Red Hot Chili Peppers’ Flea, as it focused upon the death of his late colleague River Phoenix. From such a sense of humour, one wouldn’t expect a vast tome of work. However, hidden within www.tism.wanker.com was another album.

This second album took the form of a CD-R, written on with marker pen to say ‘Att: Shock Records Faulty Pressing Do Not Manufacture’, included like Radiohead’s hidden booklet, beneath the CD case’s tray. Rumour has it that several stores around their native Australia returned the albums under the impression that they really were faulty.

This second disc sounds more like a mixtape, compiling music, poetry and poorly recorded snippets of TISM’s two primary vocalists Ron Hitler-Barassi and Humphrey B. Flaubert with chatting with pornography playing in the background.

Not only is it a whole extra album is longer that the original, clocking in at almost an hour. Including the additional album, and newly released bonus tracks (from the long lost album No Penis, No God) adds up to 33 tracks and over two hours.

Was it worth the effort for the band? We’ll never be sure, but as I’m still talking about it 16 years after its release, TISM did something right.