My desire to be a music journalist is nothing new. Once upon a time, aged 13-17, I kept a scrapbook of concerts that I attended. However, not realising just how many I would end up going to, it wasn’t updated very often. Still, it is a documentation of how my relationship with live music began. In this series, I will brush off the dust and transcribe these old diary entries (with emphasis on ‘diary’ as they aren’t reviews) in all their flawed glory.

I’m not proud of some of these, or what I write about (crowd surfing and being dropped on your head in retrospect is annoying, and nothing to be proud of). Never mind. I’m including both of the Muse 2006 entries here, as they are shorter than the other entries. Having been a fan of Muse since hearing my friend’s copy of Origin of Symmetry in 2002, I was ecstatic when I got this ticket. I haven’t been more excited for a concert since, and to get a ticket at last minute for another concert was an absolute dream. I wasn’t disappointed. 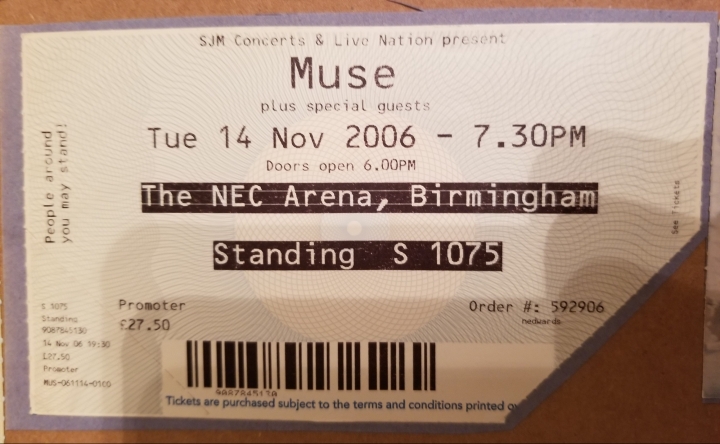 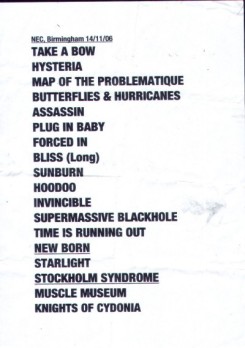 The biggest band I have seen to date were easily the best yet. This was also the furthest that I had gone for a gig. At my Dad’s insistence, I bought tickets for Muse’s Birmingham NEC gig instead, preferring a clear and longer trip to a confusing and congested one to London Wembley Arena. I went with three other people: Dad, college friend Kelly and Joe ‘The Smile’ . It was also rather expensive. I paid for myDad’s ticket as well. He didn’t really want to be there, so I couldn’t let him pay.

(NOTE: This might take a little explanation. Firstly, Joe was “The Smile” because of a daft photo of him which was along the lines of this. Also, it’s strange to see me groaning about ticket price. They costed £25. By the time of their 2016 tour, they were £75 a piece!)

The support?  Oh dear… The Noisettes. What was so bad about them? My ears were destroyed by singer Shingai Shoniwa’s shrill screams (try saying that quickly), and my ribcage was almost shattered by just how loud the bass was. Every use of the bass drum, felt like being punched.

So, onto Muse! I was blown away, though not quite as physically as by the support. Whether it was how good the show was, or just that I was star stricken. Probably a bit of both. I was finally seeing my favourite band live. It was an unusual setlist as ‘Plug In Baby’, a song usually saved for the end of the show was only sixth. Extended versions of ‘Bliss’ and ‘Assassin’ (referred to as the Grand Omega Bosses Edit), and no ‘Feeling Good’ made this an interesting and a dream set for some, myself included.

They had an interesting stage with a capsule covered in a screen that contained drummer Dom Howard. Pretty stuff. Notably, due to medication, I felt really dizzy during they performance of ‘Forced In’, probably the last song you want on while feeling nauseous. The track is the very sound of nausea. I’m tempted to write a horrifying pun about their performance blowing my brains away. I’ll resist.

Here I met a girl named Hollie, with whom I held hands until the end so we could exchange contacts. Joe spotted us, and suspected lovey-dovey-ness, and sent a teasing text message along the lines of ‘got a girlfriend then mate?’.

(NOTE: The aforementioned Hollie and I still chat to this day. She went on to become DJ Kisscut! And no, she’s not my girlfriend. Mate.) 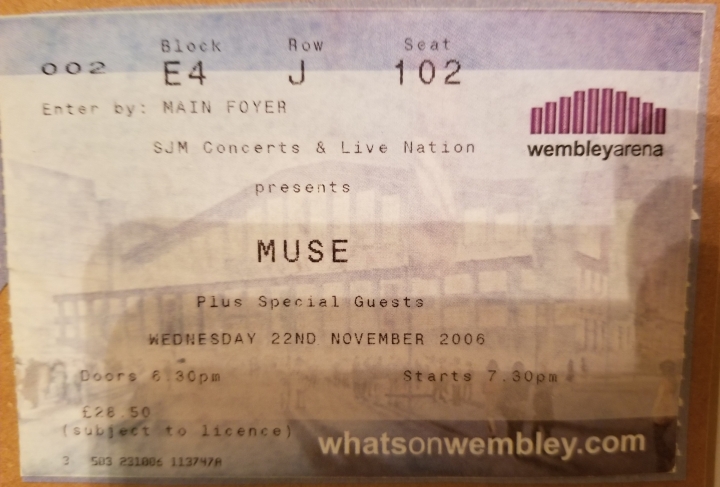 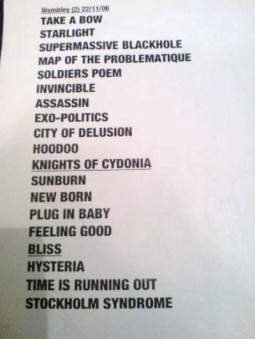 Just a week after seeing them in Birmingham, my friend Toby who had a spare ticket for their second Wembley Arena show, invited me. I was seated this time, near the front of the circle. Due to the spectacular light show that assisted Muse, I wasn’t particularly disappointed. In fact, I was half pleased as the uniqueness of tonight’s show meant this was one to sit back and witness, and not be pushed and shoved around.

The set tonight was particularly interesting considering that they performed their most recent album at the moment, Black Holes and Revelations in its entirety. Of course, it was monumental and something fantastic to experience, being the ungrateful twit I am, I was a little underwhelmed. I don’t like knowing which song is coming next. I like to be surprised. By the third or fourth song, it was obvious what was going on. Had it been an earlier album, like Origin of Symmetry, I would have been ecstatic. Here, not so much. However, this show is the most recent performance of ‘Exo-Politics’. As an album track, it would be a safe assumption that it will be its last ever performance.

Still the quality of the performance was terrific, and they were just as energetic as before. I may not have been as excited before the show as I was with Birmingham, but I was no less impressed.

Notably, the setlist states that the main set ended at ‘Knights of Cydonia’, giving this show the longest encore I have ever seen. Eight songs, and almost a third of the show’s length. It’s peculiarly chronological, opening with Showbiz’s opener Sunburn, before moving onto OoS’s tracks and closing with Absolution tracks.

(NOTE: While I have seen longer encores since by length, I think this is still the longest encore that I have seen by the number of songs. Thinking back, I complain about the predictable set, but I actually think that now their shows are so visually conceptual, that this would be a great idea today – perform the [insert album] show, and end on an encore of older hits.)